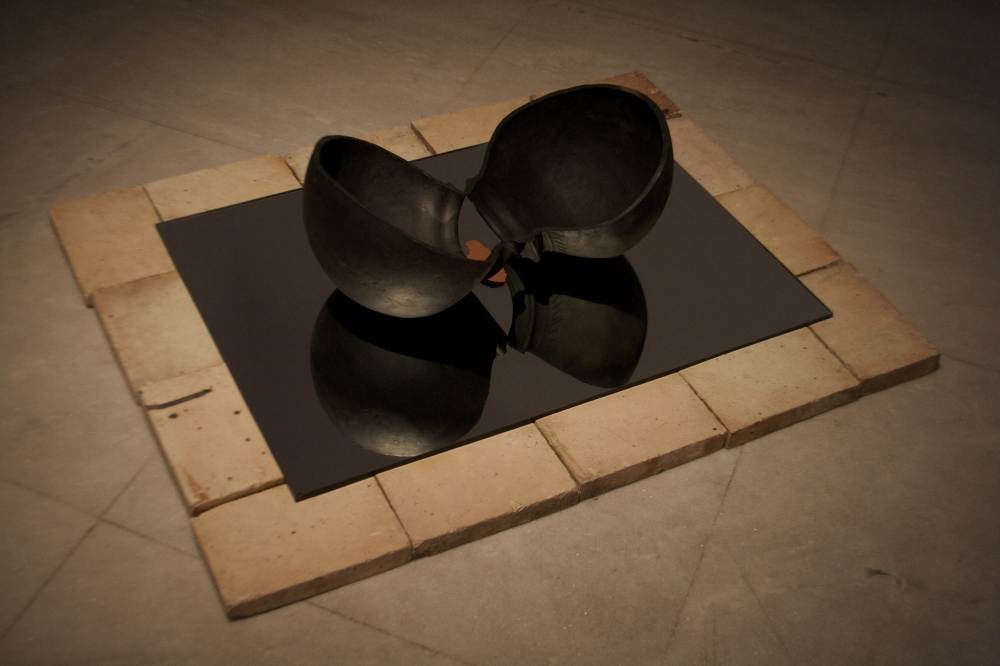 LOOK BACK IN ANGER

Rummana’s works are of particular interest because of the controversial socio-political issues she addresses. Rummana Hussain. Besides, there are very few installations in the estate of the late artist, which makes exhibitions of her work a rare and important event.

Well-known for strong statements with reference to communal violence in India, Rummana’s works refer to the politics of hatred that transforms interactions between people. The works exhibited make direct references to issues of sexual brutality and movements like Feminism; themes that defined Rummana’s career as an artist continue to be key topics today, especially in the wake of the Me Too movement. Hussain can definitely be considered a pioneer as far as performance and installation art in India are concerned.

The works exhibited in Venice offer fresh insights into old works. They explore the female form through a metaphoric language of broken pots and structures that recalls events like the demolition of the Babri Masjid in 1992. In Venice, a sense of solemnity pervaded the space dedicated to Rummana’s works – the subject matter and the colour scheme spoke to each other to summon up a sense of serious foreboding.

Rummana (1952-1999) was born to a privileged political family from Lucknow. Her mother was a Congress Member of Parliament while her father was a General in the Indian army, and was the first Commandant of the National Defence Academy in Pune. This had an effect of Rummana’s stance on social and political issues; her commitment to justice led to an involvement with activist groups. Her Muslimness was initially a mere cultural reference point; however, in later years, it became crucial to the articulation of her identity. Interestingly, Rummana was an atheist.

While studying Fine Art at Ravensborne College of Art in the UK, the focus was inevitably on painting. In the mid-1980s, Rummana lived in Calcutta where she found a mentor in Paritosh Sen, working with him in his studio. “Her early works included figurative sketches focused around her family, friends and acquaintances,” shares her daughter Shazmeen. She later moved on to painting social issues – one can see this in her Adivasi-themed works and the Colaba series. “In her early work, she expressed herself through a lot more colour and at times, humour” she adds. Rummana also used myth and allegory to depict the social reality around her. For example, in Big Fish Eat Little Fish – 1 in the late 1980s, two figures in a small boat are seen crossing the turbulent sea; they cower in fear as they encounter a gigantic fish consuming smaller fishes.

Rummana’s early paintings were figure-based – in the post-Emergency era, the figure acquired an added responsibility, that of capturing, relaying and critiquing violence. The figure was accessible and it could be used as an instrument of resistance, a carrier of protest. From 1985 onwards, Rummana spent four years at Garhi Studios, a facility supported by the Lalit Kala Akademi. She worked alongside notable artists like Manjit Bawa and Mrinalini Mukherjee. The late 1980s marked Rummana’s move away from the figurative to abstraction. She also moved away from two-dimensional to textured works – Xerox, watercolour, indigo, earth pigments, charcoal and terracotta were used on and against paper.

The Bodyscape series in the 1990s indexed the growing focus on the female body. From the allegorical to the realist mode, the female body became the location to understand societal machinations in the creation of a docile subject. References to fertility were made through halved papayas, domes and open mouths depicted through sculptures, installations and the performance in 1995 called Living on the Margins.

In January 1989, Safdar Hashmi a poet, playwright and activist was stabbed by political goons near Delhi. This led Ram Rahman, Geeta Kapur, Vivan Sundaram and Rummana to form the Sahmat Collective which acted as a platform for promoting secularism through the arts. Rummana’s family recounts another important event in their lives that affected Rumanna’s work.“In 1991, during the build-up to the demolition of the Babri Masjid, her young cousin was brutally murdered in broad daylight after offering Friday prayers at a mosque in Hyderabad. This had a deep impact on Rummana. The following years, India experienced pervasive communal disharmony with the fall of the Babri Masjid and the riots that followed in Bombay where she was displaced from her own home.” This led Rummana and the Sahmat Collective to conduct art events to combat the threat against national harmony.

Rather than a gradual progression there was a stark shift in her style, theme and material. The early 1990s saw a definite departure by way of materials – geru, neel and mitti were some of the chosen media. Violence – domestic, sexual and civilizational – and the unequal gender balance of everyday life consumed Rummana. The works seen at Venice were first exhibited in Mumbai at Gallery Chemould in 1994. Conflux (1993) is a half-cut terracotta bowl with geru spilling out – the suddenness of loss is poignantly evoked in works like Resonance (1993) and Dissected Projections (1993). Fragments from Splitting(1993) features a terracotta pot in the shape of a womb, split into two with its reflection captured in a mirror below. Broken terracotta shards recreate the disrupted field of life. What have we been reduced to? This is a question she seems to ask. Rummana’s husband, Ishaat Hussain, describes her work as having “several layers of messages, in them the primary objective being the representation of herself as a woman. Furthermore, a woman belonging to a minority religious community.” Rummana’s later works have direct Islamic references such as her installation Home/Nation at Gallery Chemould in 1996 and Tomb of Begum Hazrat Mahal in 1997.

It is ironic that there has not been a major retrospective of Rummana’s works as yet. Is this related to the subjects she investigates in her works? However, she enjoys a formidable reputation globally. She was invited to be an artist-in-residence at Art in General in New York City, in 1998, just a year before she died at the age of 47 after a long battle with cancer. Her work has been on view in exhibitions and art fairs worldwide, including at Tate Modern, London, Queensland Art Gallery, Brisbane, and at Talwar Gallery, which represents the estate of the artist. Her work is included in the permanent collection of the Queensland Art Gallery, in Australia.

The inclusion of Rummana’s work at the Venice Biennale signifies a high point in the public life of the artist’s oeuvre and underscores her value to the larger narrative of Indian art in the last 50 Years. Her family describe it as “a surreal experience and a moment of great pride.”