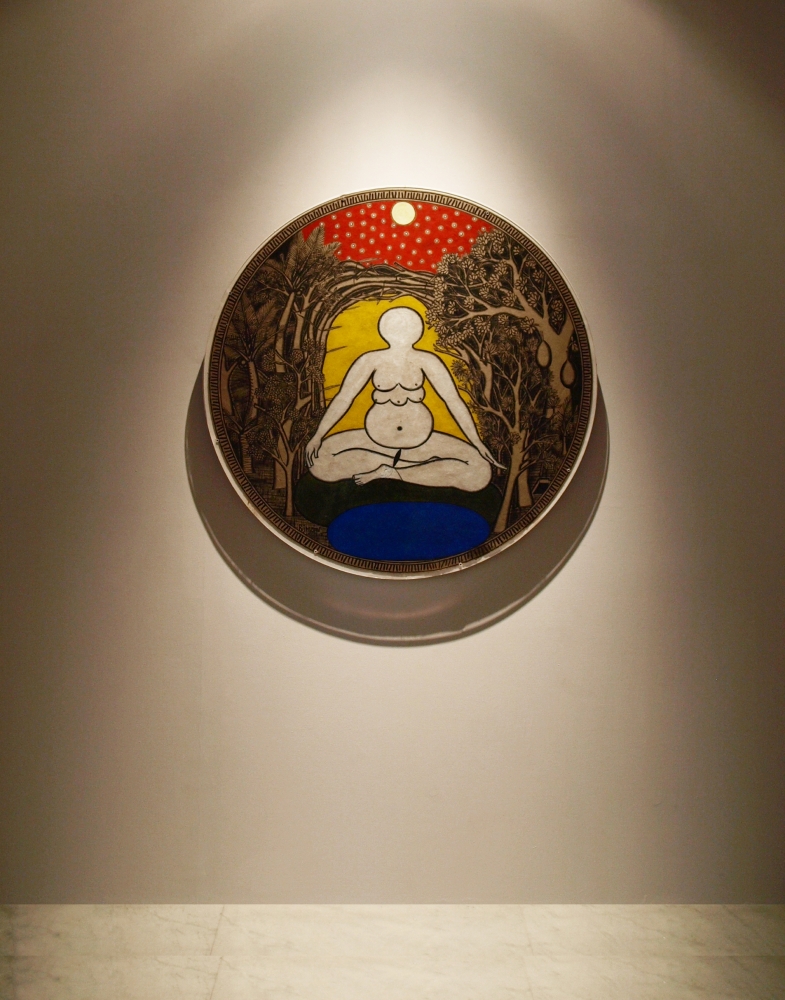 An enigmatic figure sits cross-legged in a meditative pose in the middle of a circle in N. N. Rimzon’s sculpture The Round Ocean and the Living Death, 2019–20, which lent its intriguing title to the artist’s most recent exhibition. The statue’s nose and closed eyes are vermilion, offering a vivid contrast to its grayish body. Seven breasts dangle like overripe fruit above a distended belly, merging spirituality and sexuality in a riveting manner. Is this figure a fertility goddess sitting in her charmed circle, or a hermaphrodite mendicant renouncing the temptations of the world? A similar figure could also be spied in the acrylic-on-paper tondo In Saving the Earth, 2017, only here the white figure was faceless, bearing just five breasts above the swell of her stomach, a vaginal gash indicating her gender. Her body appears to form an axis with a troika of primary colors: Before her lies a pool of bright-blue water, around her a halo of yellow light, above her a tomato-red sky with a sprinkling of stars and a wan moon. The overarching branches of a thicket of trees separate her aura from the heavens above. Both works are classic Rimzon, foregrounding his attempts over the past three decades to liberate archetypal images from the limitations placed on them by tradition and history, and generating new meanings and associations in the process. Equally, they embody his long-standing preoccupation with the interplay of three worlds: heaven, earth, and the collective unconscious.

In the wall-mounted relief Secret Body, 2019–20, Rimzon thematizes the interconnectedness of humans and their environment: A clutch of branches springs forth from a central trunk, which reveals itself as a human torso only because of a navel-like depression. Like several other sculptures in the show, this work is fashioned out of fiberglass and granite dust, and thus has a stonelike solidity. Rimzon has always preferred fiberglass to media such as bronze or marble, yet he is adept at getting it to mimic much more traditional materials. While Secret Body is imbued with the greenish patina of bronze, his imposing sculpture on the roof of the gallery, Big Maa, 2015, sports earthier terra-cotta hues. In the latter—also shown in the artist’s 2016 exhibition at the gallery—multiple breasts adorn a phallic structure.

Themes of fecundity and divinity recur throughout the show, for instance in the titles and motifs of the acrylic-on-paper tondos In Initiating the Mortals, 2017, and In Awaiting the Divine, 2018. In the former, an egg—a symbol of fertility—lies propped against a tree, while four earthenware pots clustered in the center are perhaps metaphorical stand-ins for bodies. A roofless house appearing in the latter could be perceived as an invocation to the gods to descend into it from the heavens. In the acrylic-on-canvas Under the Sky, 2018, meanwhile, a drooping jackfruit and the trunk of a tree are suggestive of sexual organs. The imagery, here and in many other works, is indebted to the tropical landscape of the southern Indian state of Kerala, where Rimzon currently lives and works. This is especially true of the arresting House Without Roof, 2019, in which the stark white walls of two homes, one with a traditional tiled roof and the other with no roof at all, form a striking contrast to the burnt sienna landscape. Once again, the artist harnesses the power of spare line and multiple perspectives within a single frame to beguile the viewer. In bringing together the sacred and the carnal, Rimzon underscores the regenerative energies that such a union could potentially release.