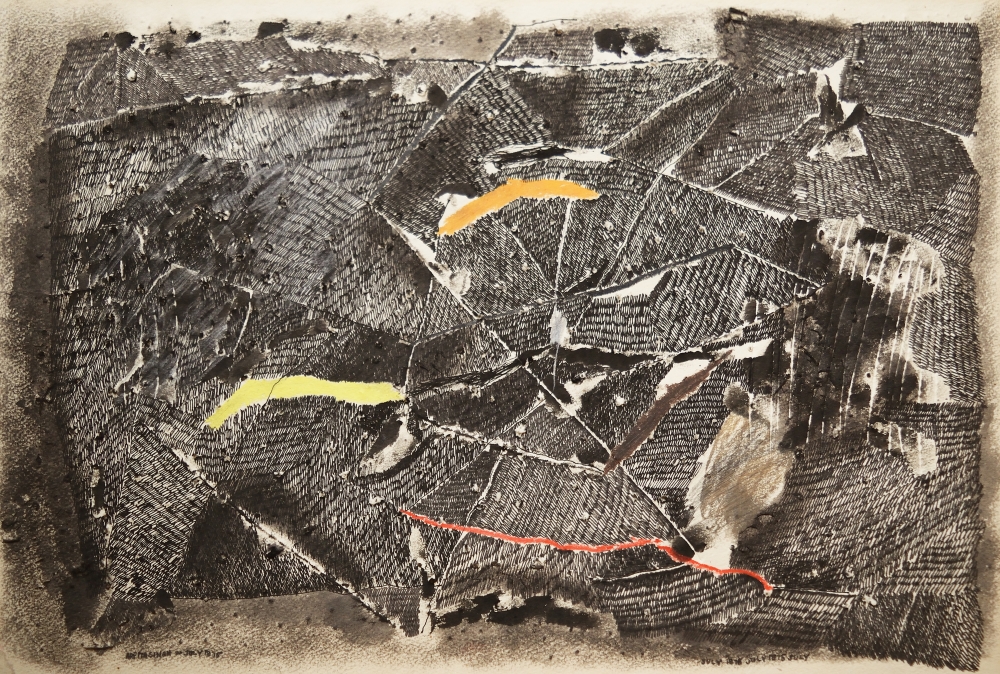 Ink, pastel and graphite on paper

The individual genius of Arpita Singh

Her first exhibition was held in 1972 at Kunika Chemould Gallery. Almost fifty years later, the Kiran Nadar Museum of Art, Delhi opened Arpita Singh’s retrospective, ‘Submergence: In the midst of here and there’ on 30 January, showcasing a seminal body of work, tracing the trajectory of her artistic practice and how she went on to establish her idiosyncratic visual language.

Eighty two-year-old Singh’s canvases are populated by floating human forms, multi-hued blossoms, as well as by symbols of war, ageing, death and loss. Her practice can be interpreted as a representation of her stream of consciousness--the figures seem to be elements teased away from memory. In addition, her charming arrangement of colour, where powder blue skies merge into bubble gum hued clouds, to her restrained monochromatic palette in her drawings, each of the compositions have a mesmeric pull.

Lounge speaks to Singh a day after her exhibition opened. Edited excerpts.

This retrospective celebrates six strong decades of your contribution to the pantheon of art. Let’s go back to the beginning though. As a young artist, who wasn’t associated with any gallery at the time, how was your work discovered?

The first person who discovered me was Roshen Alkazi, which happened by accident. Somehow, one of my artworks got mixed up with the works which were in her store. Mrs. Alkazi liked the works of one of my class fellows, artist Eric Bowen, and she wanted to have an exhibition of his work. Eric used to live in Norway, so when he came to India, Mrs. Alkazi called him and asked someone to bring Eric’s works from her store. When the two began going through the works, suddenly one work emerged, and Mrs. Alkazni said, “Who’s work is this, Eric? This is not yours." And Eric agreed; it wasn’t his. But the work had no signature on it. So, they thought and thought as to whose it could be.

Then Eric said, “Perhaps this work belongs to Arpita who studied with me". And Mrs. Alkazi thought that my art was very different from other works she had seen, so she immediately called me and fixed a date for an exhibition. My first exhibition by hosted by her in 1972. Both Ebrahim Alkazi and Roshen Alkazi became great supporters of my work since then. I don’t remember what painting it was, and I don’t have it with me either.

Your figures are at times full-bodied or deformed, at times fully-covered or audaciously naked. What is it about the human body – or the deformed sense of it – that fascinates you?

Human body is what I like to make. It’s not because I set out to want convey something, but towards the end, the forms always come together to become something meaningful. But while I am making the painting, I am just focusing on making the body. Whether they are draped or undraped, is according to the colour scheme I choose. If I decide to drape a body, I have to use another colour. But if I prefer to use one colour only, the body remains undraped. And then there is another problem: with the undraped body, you have to fill the it with something. With drapery, you can introduce colours or patterns. So, I began using the internal organs like the intestines, to cover the body, which add character to it.

A majority of your works exhibited at KNMA, like ‘My Lollipop City, Gemini Rising’ and ‘Searching Sita through Torn Papers’, reveal your preoccupation with the written word. Texts often seamlessly weave in, out and around of your figurative beings. What purpose do they serve and what counsels your choice of words?

Initially, I used to apply colours on the canvas using the tip of the palette knife, and the edge of it would leave a certain mark on the surface. So, if by chance two lines or marks became connected, they looked like Roman alphabets like W, V, X, H, T. Sometimes they would come together to make words as well. Then I graduated to making full sentences. Now it is such a strong part of my practice, that I write at the end, once the painting is complete, to connect myself with the painting. It’s like the final act.

My choice of words come to me organically, I can’t explain how or why I write certain lines or phrases, because they are not directly connected with what I have painted. But somehow, till the time I have not written the text, I cannot connect myself fully to my artwork. Text is the only way I can connect to my artwork. For instance, there is a large watercolour called ‘Woman Smoking’. At that time, I opened a few magazines and started reading, not because I wanted to find something for the work, but just to pass time. So, there was an old, TIME magazine, and that magazine was on South East railways. There was a report on the railway system in a small village in China. “There is a mirror on this side also" – this line struck me. And this is how I find words or phrases. They have nothing to do with what I have painted, but only when I write the text does the work becomes complete to me.

When you began your career, there were times you couldn’t afford sketchbooks or canvases to paint on, so you used old, waste paper instead?

Back then, we didn’t have enough money to buy sketchbooks. So, we used to make drawings on any paper. In those days, there were lots of trade fairs going on, and the fairs used to give out these beautiful catalogues. So, I began making pen-and-ink drawings on those printed pages. Then I realized that I had begun using the printed texts and making drawings by incorporating the texts. Maybe that was the first time that texts unconsciously became a part of my practice. I am very fond of newspapers, especially printed columns and the photographs. The combination of these two is what I like.

The ritual of repetition can be evidently seen in your work. Whether it is in your painted figures or your aggressively, yet meticulously arranged strokes and dots in your drawings, which weave into intricate spider webs.

Repetition is in nature itself, like in the trees, the leaves. Even the form of the raindrops is repetitive or evolution, where the human form is repetitive. Through my own process of repetition, I realised that a form cannot be reproduced exactly like another form. It can be similar, but not the same. After going through this process, I know that life is so precious. Once you have the form like a human being, and if you try to destroy it, it is a greatest sin, because you cannot bring back that form again. Therefore, symbols of life and death are bound to come into my work. We are surrounded by death all the time. You read about accidents and untimely deaths in newspapers. Many people lost their lives during the partition of India, as well as the Sikh and Gujarat riots. Death will always be with us.