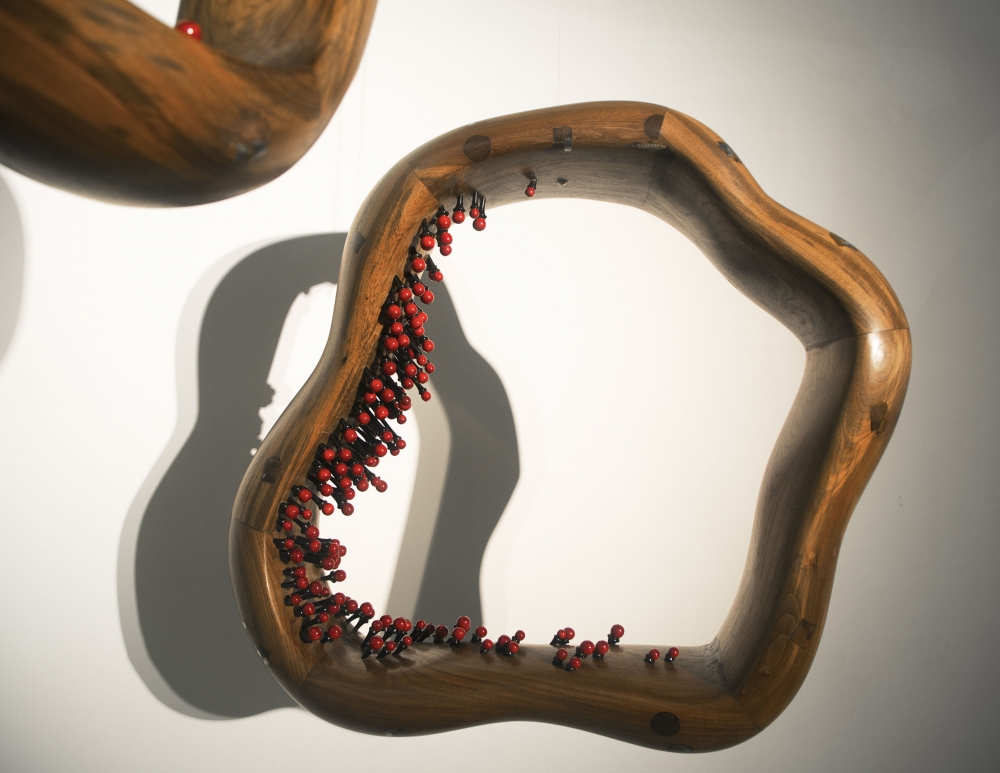 You might know the feeling of being categorized by where you’re from, and what you look like, instead of who you are, and how you see. Per a concise article in the August 2011 issue of Vogue India, while sculptor Ranjani Shettar was “happy to have her work described as ‘Indian,’ she is wary of being defined by her nationality.” Shettar told writer Allie Biswas, “I don’t believe in putting artists together just because they are from India.” Now on view at the Phillips Collection, the seven new works of sculpture in Ranjani Shettar: Earth Songs for a Night Skyconsciously respond to two European titans of abstraction who were painting 100 years ago, Wassily Kandinsky and Paul Klee. Sharing with Klee and Kandinsky a visible spirituality refracted through their respective cultures and centuries, Shettar grounds her imaginative sculptures in organic materials crafted into shapes that evoke nature. Her latest project was created for the museum’s Intersections series of contemporary art projects that interact with its architecture and permanent collection, currently in its 10th year. Displayed in two rooms and the staircase of the museum’s Phillips House building, this delightfully felt, stubbornly lovely exhibition is musically composed of three parts. Carved teak wood sculptures exist at eye height, hung from the ceiling or attached to walls. A multi-piece work made of stainless steel, muslin fabric, tamarind seed glue, and indigo pigment wraps around the wall dividing the two rooms. And a sherbet-colored thread-wax installation stretches like a web across one corner of a room. Teak is known historically as a seafaring wood prized for its strength, a tropical rainforest tree dependent on monsoon rains and many years of patience to harvest, according to WOOD Magazine’s materials guide. A sizable sculpture of teak wood and lacquered wood, “Smoke rings” (2018) dominates the staircase. While smoke rings from a pipe are an unhealthy epicurean activity associated more with men, the glossy red beads lining the inside of the rings put one in mind of women’s experiences. “From under and above” (2018) is a floating, half-illuminated zigzag of smooth carved teak, suspended in midair and aglow on its left-facing surfaces from the museum’s angled lighting to the right.This sculpture’s abstract scribble of a melody, granted the solidity of wood, casts a real shadow. The exhibition’s soaring steel-and-fabric centerpiece, “Monsoon” (2018–19), covers both sides of the interior wall. Painted with indigo, it’s reminiscent of splashing raindrops that then variously become flowers, feathers, and vertebrae. In watery hues of blue and white, the sculpture is lush with the promise of life. The last part of Shettar’s exhibition is “Mohana” (2019), an enchanting installation of beeswax bits in shades from lemon to raspberry and equally polychromatic segments of thread. Like a net that catches ideas and connects them, it’s an appealing rendering of a creative mind. “Mohana” is the only work in the show titled for neither a phenomenon in nature nor an abstraction. It’s named for a person, as the word is a first name for girls in India. Interspersed with her art are at least two of Klee’s late paintings and Kandinsky’s 20th-century book Klänge (Sounds), all from the permanent collection. Though underrepresented in the art world, women artists from South Asia are making their names. Shettar, who is represented by the Talwar Gallery, has exhibited in the United States from New York to San Francisco. She was born in 1977 and educated at art school in the megacity of Bangalore, recently renamed Bengaluru. She now lives and works in the remote Shimoga district of the same state of Karnataka in southern India, not far from the Arabian Sea, surrounded by “the jungle and the sky.” She describes her creative process as a hands-on exploration of materials. It begins with an image in her mind, projected over the material. It grows slowly.In a discussion with Intersections founder Vesela Sretenović, the senior curator of modern and contemporary art at the Phillips, posted on the museum’s blog, Shettar says, “Of course, there are so many things that are not right in this world and I do want to take them into account, but I am a person full of hope and I want to emphasize the state of hopefulness and the positive aspect of things."